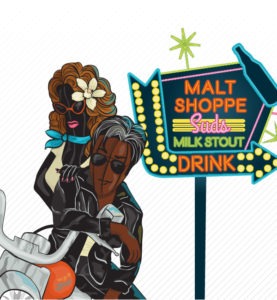 Malt Shoppe Suds is coming your way! It is packaged up and ready to rock.

The brewery is smelling great! Vanilla beans and sea salt are heading into Malt Shoppe Suds to give it that salted caramel malt flavor. We are super excited to get this beer packaged and on its way!

We got some bad news back from the lab we use for testing our beer before it is bottled. Malt Shoppe Suds tested positive for lactobacillus which is an organism that makes beer eventually turn sour.
This puts a slight delay on the beer, as we are going to brew it again. The good news is we are re-brewing it right away, at a new facility in Milwaukee and we should be able to crank it out in about 3 weeks. Malt has been ordered, it will arrive next week, the brew day is slated for Tuesday and estimated packaging day is May 16th.
Again I am sorry for the inconvenience here, But we want to get you the freshest highest quality beer, without compromise.

The beer is almost done fermenting, we just need to drop a couple points in order to hit the desired % ABV. We are giving the yeast a little boost to eat up the remaining sugars in the beer and get us up to 7.5%. If all goes well, the additions of Vanilla and Cacao should happen late this week, and the beer will be packaged around the 19th. then its off to the lab for analysis!

The final brew of this triple batch is happened on Friday . This brew is where the “Milk” in milk stout happens. In the boil we add lactose, which is a non fermentable sugar from milk. So it sticks around after the yeast eats the rest of the malt sugars and provides a residual sweetness and creamy mouth feel. In addition to using caramel malts, we are adding some brown sugar to this batch, that will be added at the end of the boil as well. Yet to come are the additions of vanilla beans, cacao nibs, and sea salt which will happen post fermentation. All in all this beer is going to be quite complex, and we look forward to it being ready to drink!

Next steps are to wait for Government approval of the label, then package it up!

Have you preordered a 2 or 4 pack yet? If not click the link below!